Drammen - A city of bridges.
The Drammen River divides the city in two, and the bridges join these two halves together like small arteries.
©lick on pictures to enlarge 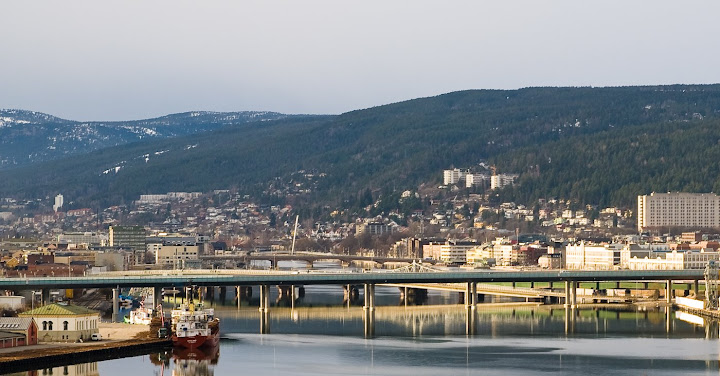 In this shot I have caught five bridges. 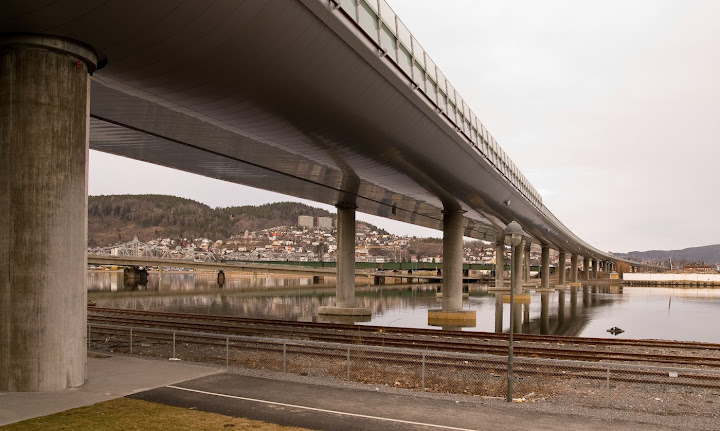 Drammen Bridge (Drammensbrua) is a motorway box girder bridge that crosses Drammenselva river in the town of Drammen in Norway. It is the longest bridge in Norway, 1892 metres long. The bridge has 41 spans; the longest span is 60 metres. The maximum clearance to the water is 11 metres. 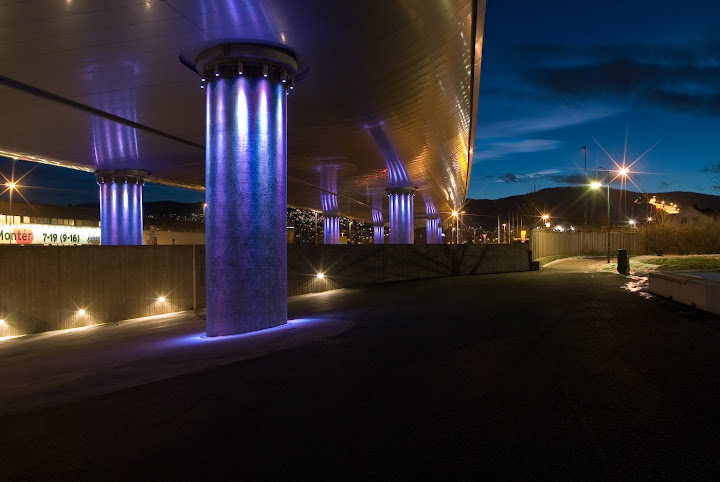 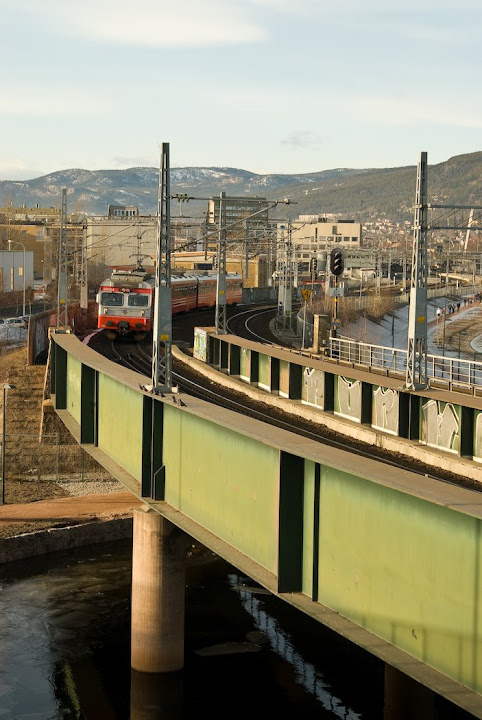 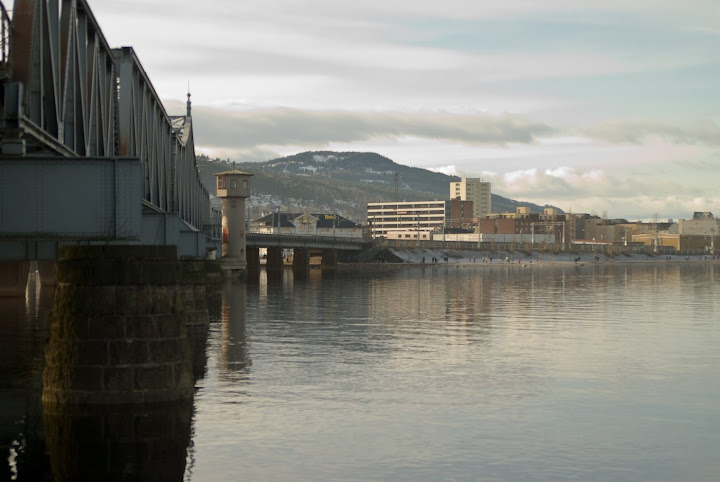 At the river mouth lies Holmen Island, with railway bridges, local road junctions and the motorway bridge, which form a dividing line between the city centre and the fjord area.

The main artery Built in 1936 in the classic functionalist style, the City bridge is located in the city centre. It replaced a wooden bridge built in 1811, which had become old and uneven and had fallen into disrepair. The City bridge is Drammen’s main artery, and carries heavy traffic in the form of cars, buses, cyclists and pedestrians. Several proposals to tear down the bridge and replace it have been put forward, but persistent maintenance work has repeatedly revived it. In a not too distant future it´s likely that much of today´s traffic will be using other crossing points, which will leave the City bridge to cyclists, pedestrians and collective means of transportation. 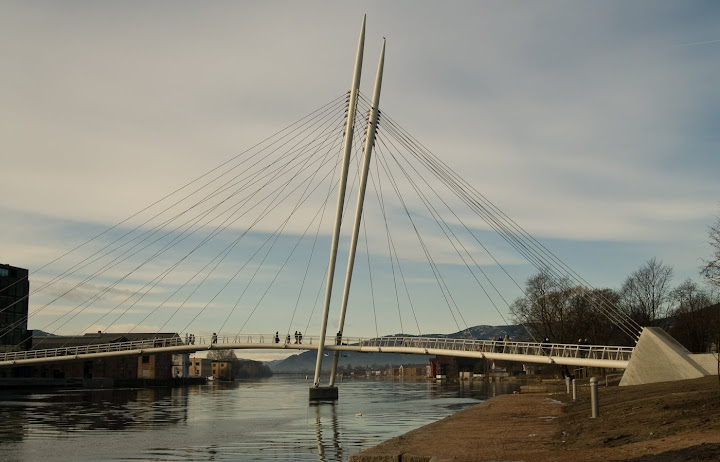 Ypsilon is the name of the new pedestrian bridge between Drammen Park (on the Bragernes river bank) and the Science Park (on the Strømsø side). 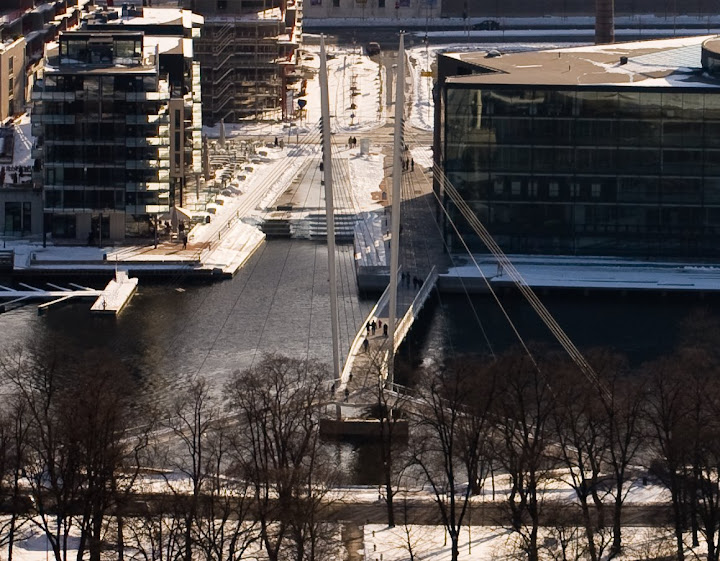 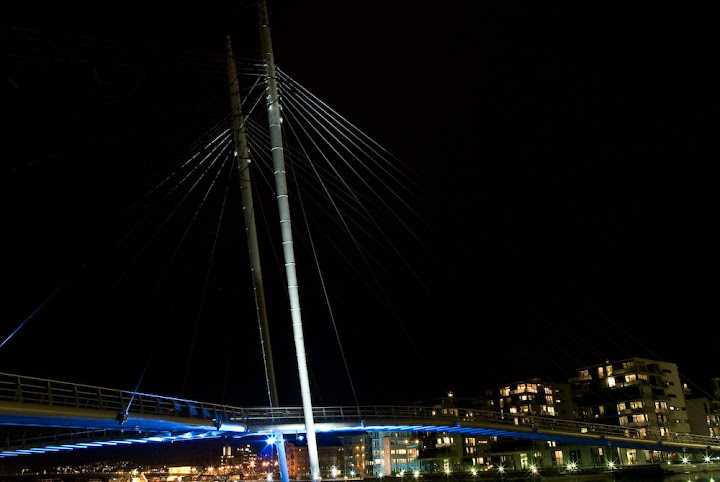 Interesting post. Of all the photos, my favorites are the night ones. Thanks for visiting my blog.

A very well documented post showing the great amount of work that lies behind. I preferred the first picture with the five bridges in "a row", but I would personally have been proud of any of them. When it also accompanied by the story behind it and the importance for the local community it must become a great post.

Now you have done a fantastic job with the photos and text. The photos are just lovely and the text was interesting! And I have drove over the one of the bridges many times:)

My Bridge is also up.

A lovely post with great information. My favourite picture is the one with train on it.

English is a strange language - the past tense of catch is not catched but caught - but you have captured it well.

The nocturnal photos are just smashing!

I love this photos, and I am often in that "neighbourhood", so it feels almost like coming home during night-time :-)

Oh my goodness those are some amazing bridges. I don't participate in Bridges but love to look at them. I really love the one with the blue lights at night.

Interesting history of the bridges. . . our town s going to build another bridge that will also have light rail going over it. Hope this happens in my lifetime.

Every shot on this page is great! I especially like the 3rd in this post and the the ketchup is somehow special, too.

The third shot is beautiful, John

Hi John! You really made a wonderful bridge post. All are great shots but I like the pedestrian bridge best. It was not easy to pick a favorite out of all those!

Where there is so much water, there will be bridges. This is a beautiful collection.

These are wonderful again John. What magnificent architecture! I love the city bridge - I love older architecture. The ariel shot and that one taken at night with it lit up is special.