My World - University of Oslo - Norway

The University of Oslo (Norwegian: Universitetet i Oslo, Latin: Universitas Osloensis) is the oldest, largest and most prestigious university in Norway, situated in the Norwegian capital of Oslo. It is considered the only Norwegian world-class research university.

It was founded in 1811 as The Royal Frederick University (in Norwegian Det Kongelige Frederiks Universitet and in Latin Universitas Regia Fredericiana). The university was modelled after the recently established University of Berlin, and originally named after King Frederick of Denmark and Norway. It received its current name in 1939.

The university has faculties of (Lutheran) Theology, Law, Medicine, Humanities, Mathematics and Natural Sciences, Dentistry, Social Sciences, and Education. The Faculty of Law is still located at the old campus on Karl Johans gate, near the National Theatre, the Royal Palace, and the Parliament, while most of the other faculties are located at a modern campus area called Blindern, erected from the 1930s. The Faculty of Medicine is split between several university hospitals in the Oslo area.

Currently the university has about 25,000 students and employs about 4,600 people. It is considered one of the leading universities of Scandinavia. 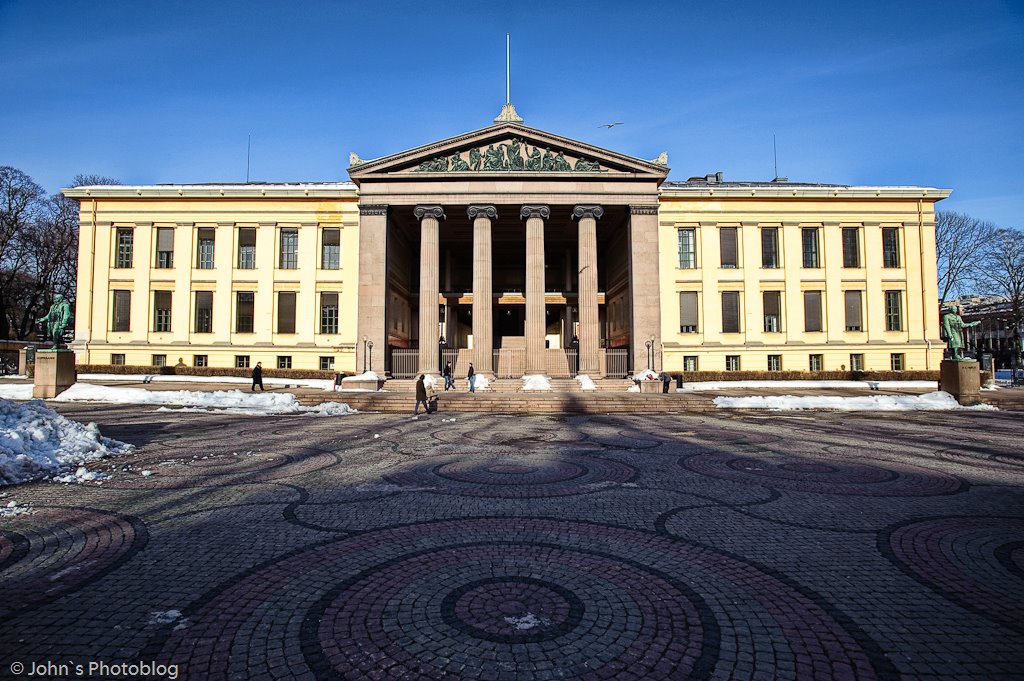 Central campus of the university, where today only the faculty of law is located. These buildings were inspired by the famous buildings of Prussian architect Karl Friedrich Schinkel in Berlin. 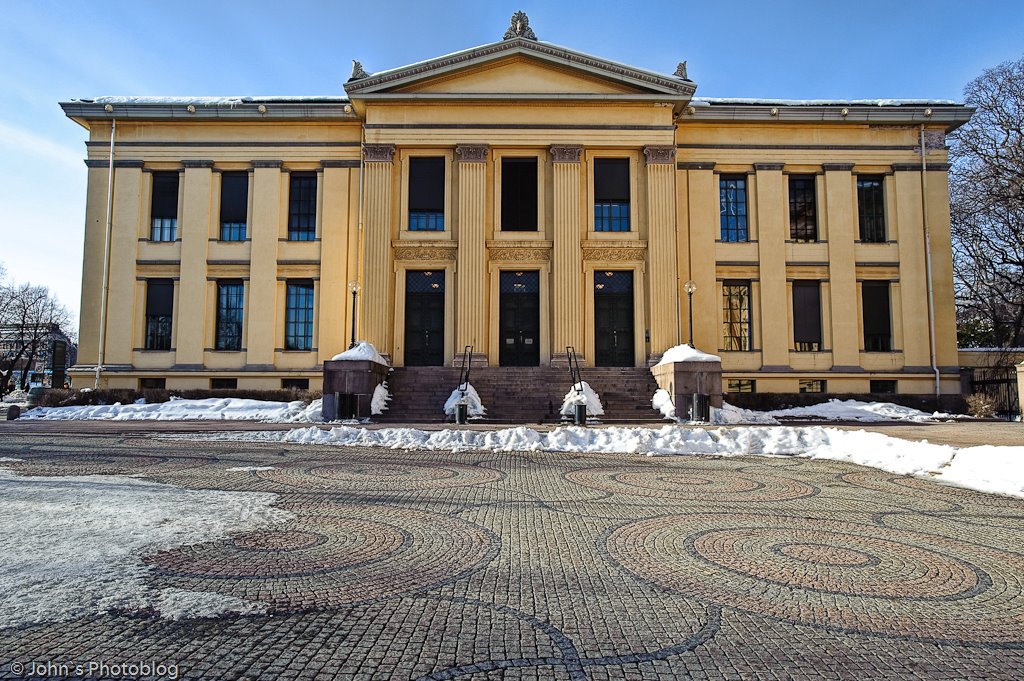 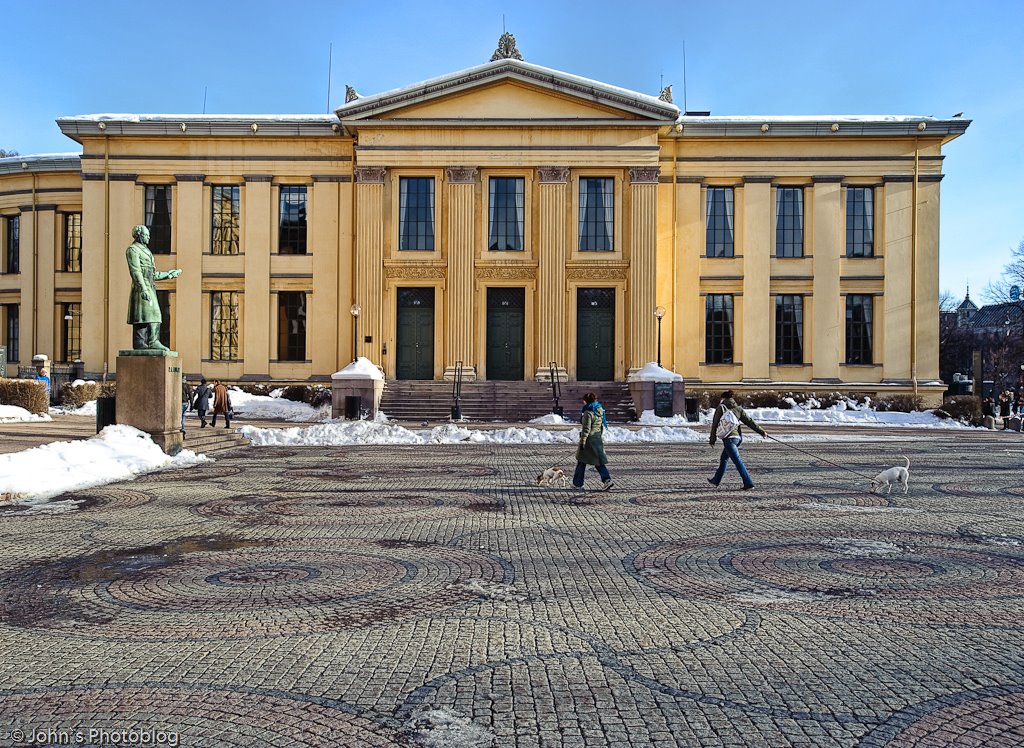 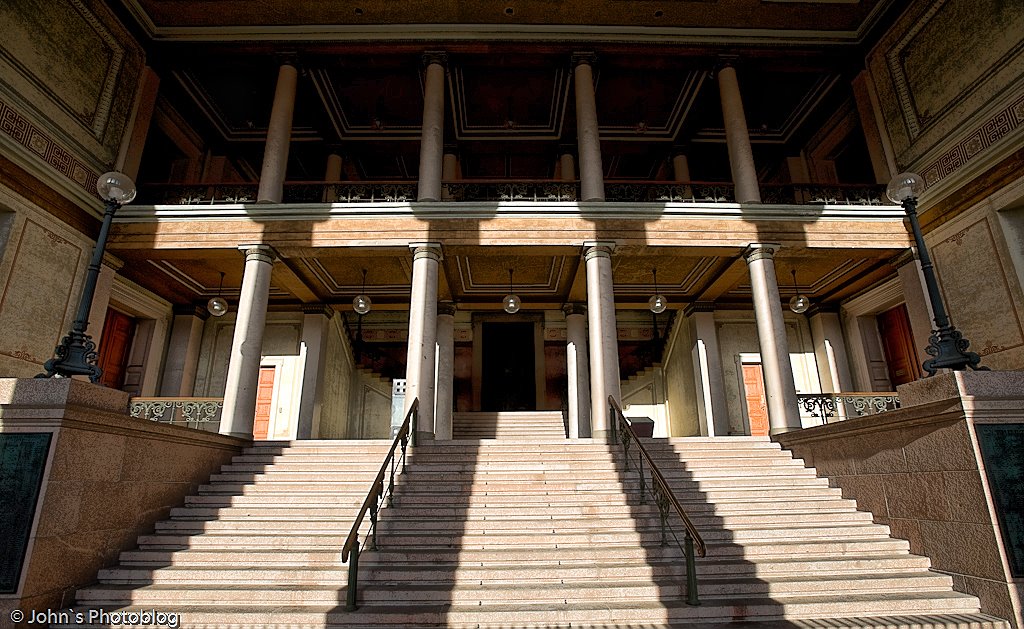 Entrance to the Faculty of Law

That is such a beautiful building. It is fun to learn more about other parts of the world through this new meme.

All I knew about Norway so far is that it is very cold ;)

John, you give every shot so much thought and attention - I love that! Did you study here as well?

Beautiful university! and your shots are just magnificent! as always! Thanks for sharing, John!

It actually bears a resemblance to the Royal Palace you featured last week in its style of architecture. Magnificent photos as always!

Sure looks a fine building John.

Have a great week!
Guy
Regina In Pictures

They just don't build buildings like this and your shots of the Stortinget. Thanks for sharing your countries beautiful sites!

You really do have some impressive buildings around you, lovely.

So beautiful, and i love the design of the cobblestones

A very stately and elegant building...

so much attention to detail, this makes for a visual appealing city. you have a pretty campus.

Again, my hat is off to you John. Beautiful work!

Great work with the light/shadows,John, especially on the fourth one and a very informative post. Thanks, John!

I'm very impressed with the architecture! It's like our univercity! If I didn't know that it's in another counrty I would say that it's Greek! If you want to see the similarity visit http://uoa.gr/uoauk/uoaindex.htm to see the univercity of Athens. Nevertheless I'm SURE that the lessons in YOUR univercity are high quality -as we hear- and the education too! So the similarity is refered to the architecture only!

Hello John
The photos are magnificent, as always.
Congratulations!

Last fall I visited the campus of Harvard University. Yours is 100 times more beautiful. How lucky you are to have such a legacy. Harvard is a hodgepodge, not pretty at all.

Last fall I visited the campus of Harvard University. Yours is 100 times more beautiful. How lucky you are to have such a legacy. Harvard is a hodgepodge, not pretty at all.

These are excellent photographs. Maybe you would consider uploading them to Wikipedia to make them available for more people to see (like in the Wikipedia article that you are citing), Wikipedia has some photographs of the Karl Johan campus but not as good as these. You can upload them at commons.wikimedia.org, just register an account (it takes about 15 seconds) and click "upload file", select "own work" and select the recommended license, which means that you are credited for your work. You would need to remove the © thing from the pictures, though, in order not to create confusion.

If you upload them, remember to include them at this page: http://commons.wikimedia.org/wiki/University_of_Oslo

Just click "edit" and include the file names under "gallery"

Hello,
I’m a student from Bangladesh. I want to get admission in your University. I found Your University address from sromobazar.com.Can I apply from the site to you? Do you have any agent in Bangladesh?
Pls reply me at somorita131@gmail.com